I recently spoke at Devoxx Belgium about Camel Quarkus (you can find the recording here: https://youtu.be/FBWgbhp8FG8) and for this talk I wanted to demonstrate just how easy it is to integrate different components using Camel. I also wanted some interaction with the audience and make the session a little more fun by having them participate in the demo.

My initial idea was a voting app where the audience could vote for their favorite IDE by using Twitter. It seemed like a neat idea, I could use the Twitter component of Apache Camel which I had already demo'd during a talk I did for the Openshift Coffee Hour (https://youtu.be/aaEV19c6GhQ), but ultimately I decided against it because I really wanted more than just a handful of votes (if that). Since my talk was also about using Camel Quarkus in a Serverless way I needed a LOT of votes from the audience :P.

What I came up with was to build a small web app where the audience could vote through the UI which would send a REST Get request to an API that I would expose using Camel; and then update a database that I could poll to show the results live on the big screen. I didn't want the API requests to immediately update the database, but instead stream them to a Kafka topic first and then handle the requests and update the database under a controlled load. That would allow me to also demonstrate how easy it is to integrate Camel with Kafka. It's basically one line of code:

I still wanted to show the Twitter component as well as an additional feature, and finally, just in case there weren't going to be too many votes, I prepared another rest endpoint that I could call with jmeter to 'cheat' the result so I could show the audience how the system would scale pods out rapidly under load. Using Quarkus and Knative that's super easy to do since Quarkus starts up super fast, and Knative scales out rapidly based on requests.

The UI application features a, well, UI, that shows the results of a poll and a form to vote for your favorite Java stack. When you vote, a REST POST event gets sent to the 'ingester' app, which will translate the result and add it to a Kafka topic.
The 3rd application (processor) consumes the Kafka messages at its own pace and updates the database accordingly. (eg. if someone voted 'Vim', the counter for vim would be incremented by 1) The 'retriever' application (currently embedded in the processor app) has a REST GET endpoint to get the results from the DB.

So ultimately the application is composed of the following components:

UI
The ui application displays a list of java stacks/frameworks that you can vote for by clicking the respective button next to it. This action calls the ingester app. The page also displays a bar chart of the results so far. The app is built with Quarkus Qute templating and some crappy javascript/jquery code :P

Ingester
The ingester Camel Quarkus application receives requests from the user (via HTTP) and forwards the requests to the Kafka broker. The main component of the application:

Processor
The processor Camel Quarkus application receives the vote requests from Kafka, processes them, and writes results into the votesdb Postgres DB table. As of right now it also returns the results through a /getresults endpoint. The application has the following Camel Routes:

And this is basically the UI of the voting app: 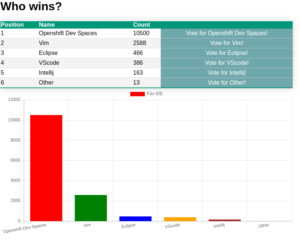 You can find the source code in my github: https://github.com/kdubois/CamelQuarkusVoter

Ahh… Covid-19. From thinking it was just another little outbreak in Asia to months long lockdowns and seeing friends and family succumb to this nasty little virus, it's been a surreal year-and-a-half. Earlier this year we finally got some hope with the rollout of vaccines, and I personally was very eager to get vaccinated and hopefully leave my anxiety to leave the house behind me. I currently reside in Brussels, Belgium, and unlike in the US, the vaccine rollout was, at least initially, painfully slow. The Brussels government did however set up a nice little web application where they would keep everyone up to date with the current age group that was eligible to get vaccinated. The only caveat was that there was no way to keep informed of any changes to the age group other than refreshing the website. Which I did several times a day for a day or two. But, I wouldn't work in tech if it didn't seem a bit silly to perform a manual repetitive task right? :D

I saw a while ago a nice little demo of one of my colleagues at Red Hat who used Red Hat Fuse (based on Apache Camel) to send a message to Telegram, and this seemed like a pretty good way to go since I use Telegram on a daily basis anyway. The advantage of using an Enterprise Integration Pattern based system is that it makes the solution quite flexible, so if at some point I want to send the message to another endpoint then all I need to change is the "to" parameter of my Camel route and I'm good to go. Likewise, if I want to adapt this code to scrape bits of data from another website, then that's a very easy change as well.

Anyway, take a look at the video and let me know what you think!

The source code can be found in my Github: https://github.com/kdubois/datascraper. Feel free to scrutinize and send pull requests with improvements!

#Java developers - you're being interviewed for a new position & you're asked about the differences between #Springboot & #Quarkus - could you answer? And then, the question "write some code to migrate a Spring boot #microservices app to Quarkus" 😱 - could you do it? 🤔

Gentle reminder that @RedHat among others have supported distributions for OpenJDK

Oracle has made a change to licensing. Shocking, right?

For Oracle Java now, you must license for ALL users in the environment if you have ONE instance of it. It’s no longer to only license the server/CPU counts.

I cannot emphasize enough to rid of it.